For lack of a better term, borrowing from what friends call theirs, we have started having a bit of time at the table together every day. I want to keep it up because so far, it’s actually a positive change for us. My boys have been just a little bit more interested in learning lately and I’m trying to run with that while giving Jenny time to do a few more things that might be requested by her teacher. Yesterday everyone did their own thing – Jenny working on various things, Ben reading a book (the only book he says he can read), Erik and Elias working on printing, Sam tracing in an Usborne wipe-clean book and Oliver moving back and forth from one activity to the next. Today we did an animal facts game. I read the facts on half a card and the kids had to guess which animal it was. Ben got five right and each of the three oldest got ten. It was fun and low stress and didn’t feel overly structured. 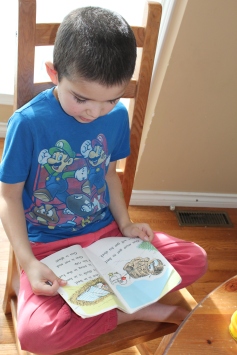 Simon hanging out nearby

Sam tracing (needs work on that grip, though) 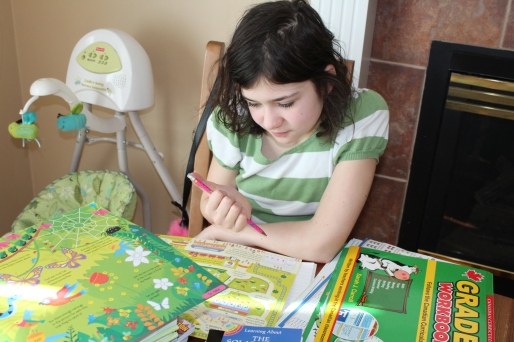 Oliver drawing on the book..and himself

The fact is, we have structure but very little of it has been devoted to learning. Kids get up, have breakfast, the kid of the day has their two hour computer turn and usually a few others watch or help them. After that, they clean up the designated room in the basement, have lunch and start their one and a half hour turns on the tablets and/or Xbox. This means most days, they only have an hour and a half of personal screen time and some days they have two hours more. A movie is watched occasionally by one or all but generally they spend any other free time they have making up games, playing cards, Lego and every so often reading. With the recent push to get Erik and Ben reading and the start of my Usborne selling (and therefore buying), there has been an increased interest in books. But really, by the end of every day, I found myself wondering if they really would catch up. Or even start pursuing learning more as they got older. Or would it be like this every day? So two nights ago I had a sudden inspiration to ask them what they thought of a daily time at the table doing “schooly” things. It was a mixed response but we tried it out anyway. I have no desire to start traditionally homeschooling but I have toyed with the idea of enrolling Sam next year which would mean reporting to a teacher (and increased funding for him). A little bit of routine in this area would make it a lot easier to do that without stress.

Sometimes change is necessary and good. Sometimes it’s also hard. This change is likely going to be harder for me than my kids, though.